Mothers play particularly important role in the education of children. Our Self-Employment Education Program for mothers, in collaboration with Child Development Society (CDS), provides literacy and business management classes for around 30 disadvantaged mothers. The class is conducted by a facilitator, two hours every day.

We believe that this program will help the mothers to run their own business, which can provide stable and sustainable income sources to the family, and further contribute to support in children’s education. We think that through this program, mothers would be capable to support not just financially, but support or follow-up children’s daily study.

Targeted group for the program

Doing Good in Life – Sarita’s life dream, and how SEEP is helping 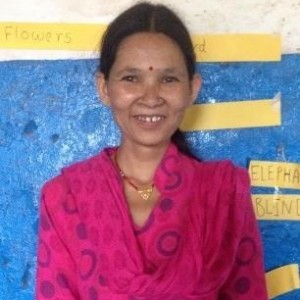 Sarita Giri (37) raises two children, 16-year-old daughter and 13-year-old son. Currently she is a cleaner at bank, but she envisions having her own retail shop to support her family in the future

Raising two children by herself with a low-paying job has been very tough. She used to work as a painter previously, but her job caused health problem, which forced her to quit the job. Since then, it has been difficult for her to have a stable income to support her children’s education.

Her lack of literacy was a major barrier for her job search, and she felt she was wasting her time, just waiting for ‘luck’.

Now, there is no time for Sarita to waste. She has been attending SEEP class from the first day and enjoys her busy days. She says she “learns a new thing every day.” Thanks to the SEEP class, now she feels she is doing something good in her life. Another major change was becoming able to teach her children what she learnt at SEEP. Encountering other motivated mothers at SEEP, Sarita wants to find a business partner from her classmates to run a grocery store together.

Acquiring literacy is beyond starting her job, increasing income, or educating her children. Sarita has a “longer-term dream – to do something good in my life so that no one would say bad things about me.”